“Navroz Mubarak,” is the traditional greeting between Parsis today as they celebrate their own New Year.

Despite the fact that the Parsi community has dwindled to a tiny minority of maybe as little as 100,000  people in India, the annual celebration is a Bank Holiday across the country.

By By Eric Bellman / The Wall Street Journal

This illustrates the disproportionate amount of weight this hardworking community (which came to India centuries ago from Iran) pulls in India’s economic and social life, especially in Mumbai. 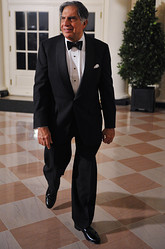 As tradition-bound Parsis in the country’s business capital spend the day visiting local fire temples and going to parties in their best new outfits, they’ll discuss the regular issues of any Indian community gathering: weddings, births, deaths, business and politics.

However the dominant topic this New Year is likely to be about the undisputed king of the Parsis—Ratan Tata.

By leading his group to multi-billion dollar international acquisitions and launching the $2,200 Nano compact car that has fascinated the world, Mr. Tata is arguably the most famous Parsi ever. Freddie Mercury from the cult band Queen may be better known outside business circles but few of the deceased singer’s fans know of his Parsi roots.

King Tata is ready to step down from the Tata Group which has recently become India’s largest conglomerate, Indian business papers say. While he says he is willing to hand his crown to a non-Tata or even a non-Indian, many Parsis want him to keep it in the community, if not the family. Mr. Tata’s half-brother Noel Tata is considered a front-runner for the job.

The Parsi community will be buzzing about the issue today and it should know the new head of Tata by the next Parsi New Year. While Ratan Tata is scheduled to hand over the crown only in Dec. 2012, he is expected to name a successor sometime next year so his heir can be readied to take on his mantle.

“A Tata succession (or lack of it) is not a mere corporate issue, but involves the entire community and it’s talking cockatoo,” wrote Bachi Karkaria, in a recent column in the Times of India. “Every Parsi has worked in a Tata company, lived in a Tata colony, benefited from a Tata grant, or at least waltzed at the Taj. The Tatas are the Parsis and vice versa because every Parsi owns a Tata share. Queen Victoria may have disappeared from Parsi walls, but the benign J N Tata continues to hang right there beside the Prophet Zarathushtra.”

While the Tata Group has been headed by a Parsi for its full 142-year history, it has always been one of the companies in India that was most likely to give power and top positions to non-family members. Some Parsis think handing over control to non-Parsi would be an appropriate next step on the path to becoming India’s first globally known multinational.

“Maybe it is my American indoctrination but I don’t see why this is such a big deal,” said Ader Gandi, a Parsi, a U.S. based mortgage broker and manager of a website which helps Parsis find long-lost friends. “After all it’s one of the largest conglomerates in the world. They should decide the leader of this group on the basis of merit and not ethnicity.”

The Parsis of Ajmer →