Chef Meherwan Irani on winning the James Beard Award 2022, colloquially known as ‘The Oscars of Food’

For chef Meherwan Irani, winning a James Beard Award is a crucial step towards putting authentic Indian food on the global map 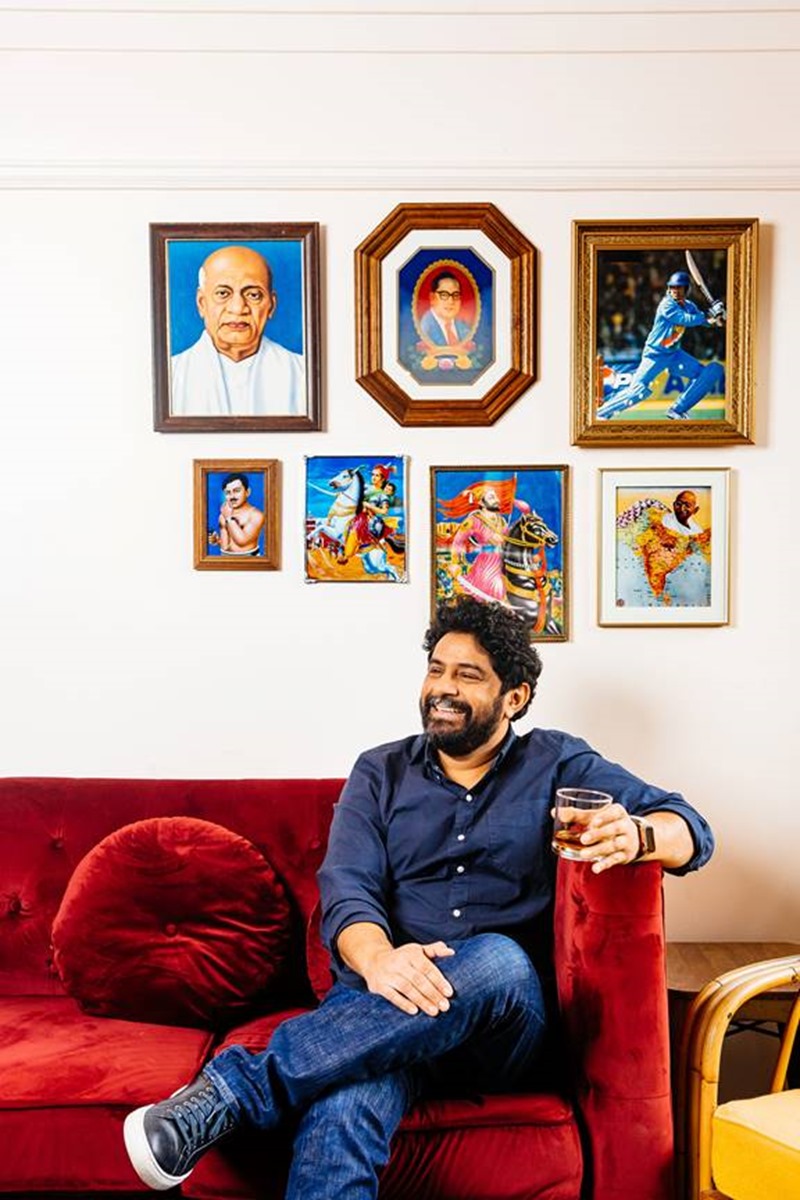 When I arrive at Bengali Market in Central Delhi to meet Meherwan Irani to eat chaat, he is five minutes early. I expected this; chefs have a way of following time unlike most of us. In a kitchen, after all, a two-minute delay can cost a reputation; an evening spread. When we meet, he points at me and declares, “Now tell me, what should we do, you’re the local,” but I am ill-prepared that morning, not feeling very much in charge. The declaration, however, is customary; it will soon become that Irani will be the one that effortlessly guides us through the day, ordering plates of chaat, and taking the initiative to create interludes of kebab rolls and coffee.

Irani is the Indian-American chef of Chai Pani, the casual Indian street food restaurant, which he co-owns with his wife Molly Irani. While the café has been in operation since 2009, it recently shot into public imagination when it won the James Beard Award for America’s Most Outstanding Restaurant in 2022. But much before the awards, Chai Pani was an integral part of the small city it belonged to—a popular, beloved spot with both locals and tourists in Asheville, which led to the Chai Pani restaurant group opening seven restaurants and one spice company across the United States. 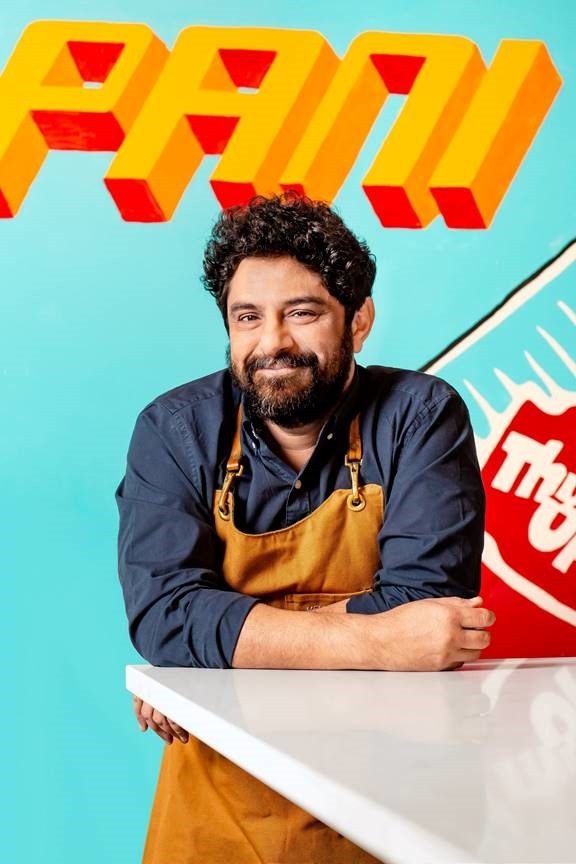 This is an even more incredible feat when you consider its demographic: Asheville’s residents, the majority of whom were White and remain so to this day. “How many of these people had eaten Indian food before?” says Irani, about this precursive challenge. “And chaat? Man, not many, I know that. When our food arrives, he picks the ingredients apart academically, noticing the hing in the raj kachori; the freshness of the sev. “This burst of flavour in here, to us, this is normal right?” he asks. “But not to most Americans,” he continues. “I was like, come on, America, you need chaat. You’re really missing out!” Irani grew up in Ahmednagar, Maharashtra to a Parsi father and a Punjabi mother from Dehradun. His family was “multigenerational and multicultural”, and it was his mother, Amrit who was his earliest culinary inspiration at home. He doesn’t use the term “multicultural” lightly. In his family, there were “new dishes born out of old, a simple North Indian dal near a Parsi fish or meat dish; a pasta, or something else my mother would have concocted out of her imagination”. When Irani was a young boy, his grandmother turned their home into a BnB for the tourists who came to Ahmednagar. And so, when the Irani family ate and cooked, it was a new thing every day—cooking dishes between the many cultures they belonged to and were interested in, and also cooking for their guests. A mural in the interiors of Chai Pani in Asheville

These operations were headed by Amrit. She cooked with a kind of determination, “not just cooking with love, as they say, but also expertise,” Irani explains. Also in this kitchen were his first lessons in sourcing and planning. “My mother was this fearless working woman, taking care of my father, who is visually impaired, us, and our home,” he recalls. “I knew it wasn’t magic, and it wasn’t easy. I knew what went into making a good, successful meal.”

In the early ’90s, Irani moved to the United States after earning his bachelor’s degree in India and started working a part-time job at a restaurant, which is where he met his wife and business partner, Molly. In some years, Molly and Meherwan became a duo in every sense: co-living, co-parenting, moving cities and finding their place as a young couple in a country going through economic and demographic change. The couple’s life took them to San Francisco, where Molly already worked, and Irani found a job at an automobile dealership, “falling in love with the car business for a while”. He remembers eating well in San Francisco as “Alice Waters, Thomas Keller and lots of young, independent chefs were doing really cool stuff”. He also remembers that Food Network TV had just begun, and even if he wasn’t a chef yet, in San Francisco, a city wrung with new movements and many cultures, Irani developed his already expansive palate and became a devoted, sophisticated home cook.

But as California’s rents escalated thanks to the dot-com boom, like many young couples, Molly and Meherwan saw themselves going elsewhere to live a better life. In 2004, the couple moved to Asheville, which they loved. “It was progressive, quiet, beautiful and good for our daughter,” Irani remembers. He found another job he liked in real estate. But soon, with the financial crisis of 2008, everything turned upside. “‘And now what?’ I thought. ‘What will we do now?’ I knew we weren’t coming out of this one.”

Like the moment before dreams come true, Irani’s story reaches a crux here: Time speeds up, details become vivid, and the linearity he employs for the rest of his life evades him when he thinks of Chai Pani. But it all started in 2009 one day when he was in the car with Molly and his daughter Aria. “We were talking about the crisis and our own lives in it, and Molly said to me, ‘You always do what’s convenient, why don’t you go out and pursue something?’” The word stuck with Irani. Pursue. It demanded action. Some nights later, while they were reading in bed, he announced his plan to Molly: That’s it, he was going to start an Indian restaurant. Photographs of India adorn the walls of Chai Pani in Asheville

“I still remember how she looked at me then—like I was crazy,” he laughs, but after seeing Irani draft menus like a “mad scientist”, Molly became involved, drafting plans and layouts, and creating a foolproof formula to open the restaurant of their dreams. Irani spent hours mulling over loopholes, using his past work experiences to go into Chai Pani with clarity. “I had to do it properly. Restaurants were not only a labour of love, they involved people, real workers. I couldn’t be fanciful. I needed it to work.”

Eventually, through open letters to friends, family and acquaintances, Irani crowdfunded their first investors and found a spot for the restaurant. Around the same time, he asked his mother for recipes (always delicious, always inexact), and began to test them for Chai Pani. In the month the restaurant opened, the whole town pitched in—cooking, serving and promoting their new spot. “Kind of like that scene in Kal Ho Naa Ho!” he says, using the reference before I can. The food was robust, delicious and honest. Much of it remains on the menu today. There were okra fries (airy, crispy and doused in lemon); the Sloppy Jai, a spicy, juicy burger which was a take on the popular American comfort food. On Molly’s advice, Irani added a thali to the menu. “She knew people would ask for that, but I did it in a non-generic way, always switching up the mains,” he says. From the get-go, Asheville loved Chai Pani, and only some months after they launched, The New York Times put the restaurant on a travel recommendations list, boosting its local appeal to the millions of tourists that visit the city every year. “That was cool! But I didn’t want to be on any radar; I wanted to make people happy, my family happy. I just wanted to do what I loved,” Irani smiles. When we leave Bengali Sweets, Irani and I head to the spot that we like best: a matar kulcha stall behind the market, where we eat off a police divider that we turn into a table. “This is the way to participate in a city. This is what I want to bring to Chai Pani—the dynamism, the madness, the absolute, unfiltered fun,” he says between mouthfuls. “I will put the technique of our street-food vendors up there, even above some Michelin chef,” Irani says, as he thanks and congratulates the matar kulcha chef profusely. “How to feed hundreds, and with such flavourful dexterity. Never underestimate it. It’s everything, really. It’s art, culture, science.”

Today, Chai Pani is always swathed in lines and warmed by regular customers. It’s a family affair, in the way that it is familial—comfortable, informal, fun—“somewhere people can linger, nothing fancy, cryptic or daunting”. He tells stories of the early days, of long hours at the restaurant, the aromas of lemon and hot spices, and the zesty hit of chaat enveloping him for days. He tells of Molly working the front of Chai Pani (“people always trusted her, confided in her”), and their daughter Aria roaming the restaurant’s bright contours, talking to guests. Irani also tells of the initial scrutiny—from “white Americans who had been to India and had opinions on authenticity” or from Indians, when he experimented with recipes in ways that were not conventional. “But it’s natural, we have culinary histories that are thousands of years old,” he says about the latter. “It makes sense that people are queasy about change.” When we finish our day with coffee and lime soda, I ask Irani again about the James Beard Award, and he reacts with both joy and incredulity. “I thought, ‘Me? An award-winning chef?’ I’m just like a family guy, man! I was legitimately surprised,” he says. But maybe that’s it, I tell Irani, gone is the time of White men who ran kitchens through fear and of glitzy restaurants that engage in bizarre rituals to create exclusionist concepts of taste. I have always been confused at the tales I hear of American dining; of the intense glamour injected into food; of competing, cutthroat culinary worlds that feed only a select few. But Meherwan Irani is none of that and neither is Chai Pani, which makes it precisely the restaurant that America perhaps needs—and wants—today.