Kei Kianpoor's Cyrus the Great: A hero for all ages

In a world spiralling out of control, one man hopes that the story of one of history’s most secular leaders would prove an inspiration. Joanna Lobo talks to the man bringing Cyrus the Great’s story to life. 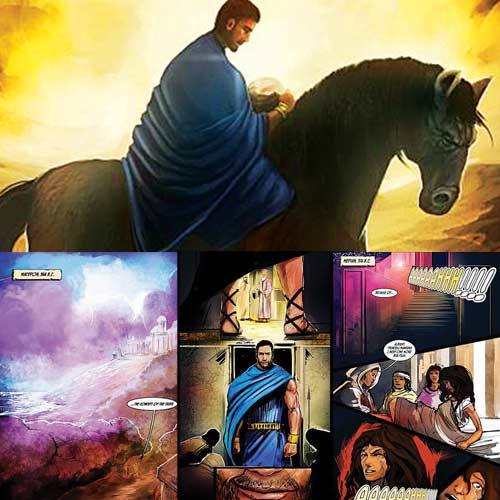 Pages from the first chapter of The Persian

Kei Kianpoor had a dream.  An Iranian growing up in Brazil, his only link to his heritage was through the books and stories he heard, the most prominent of those being the one about Cyrus the Great. Kei’s dream was to spread the legacy of the person who had influenced his life, the Persian king and secular humanist leader who had also inspired Alexander the Great, Thomas Jefferson and Machiavelli, with his thoughts on human and ethnic rights.

“Cyrus was given the choice between good and bad and took the risk of doing good. We can’t do in a civilised world 2,500 years later, what Cyrus did back in the then barbaric world,” says Kei, the CEO of Investars, a company that does research valuation.

Kei’s dedication to Cyrus, a man he has tried to live his life by, bore fruit six months back. He started work on making the life of Cyrus known, through a movie and a graphic novel. The first of eight chapters of the graphic novel, to be called The Persian, will be out in October.

The first chapter will talk about Cyrus as a baby, sentenced to death by his grandfather, the king Astyages who had a dream that one day Cyrus would overthrow him. The baby is kept to die in the mountains where he grows up among wolves. This chapter also sets up the character of Harpagus, the king’s general sent to kill the newborn Cyrus.

Kei’s work started with writing the screenplay of the movie, which he hopes will be a Prince of Persia-type action flick. “The screenplay I wrote is very visual and lends itself to great illustrations.

I thought of the graphic novel as it would provide a good opportunity to get feedback and fill in the few gaps in history,” he says. The idea for this came from the movie 300 which was originally a graphic novel brilliantly adapted for the screen. Kei  is now working with a young artist to bring 500BC Persia to life.

Cyrus could very well be the superhero that is much needed in recent times. His story is synonymous with the story of human rights. Cyrus’s empire was one of the three greatest empires in history and it was known for instituting human rights at a time when no one had heard of them.

In his kingdom, people could work where they wanted and follow the religion they wanted. While Kei was growing up, he couldn’t reconcile with the fact that the tradition he had known and loved had turned into the totalitarian regime.

“The movie is also a commentary on totalitarian regimes in the world where freedom of religion does not exist,” he says. Kei also plans on giving it a political angle using scenes from the current world including riots, murders and protests.

Given this, while the movie on Cyrus will be just one (with an adult rating), Kei hopes to have two graphic novels one for children and the more violent one for adults. The film is currently is in need of financiers.

When Kei started his work and the corresponding Facebook page, he was sure the character would appeal to Persians and the Parsi community. The feedback he received, from all across Eastern Europe, the Arab world and even India, surprised him.

Kei, who worked in the UN and spent two years in Sarajevo, hopes that a day will come when every child will learn about his rights. “It would be what Cyrus wanted,” he says.

India Urges One Community to Reproduce →